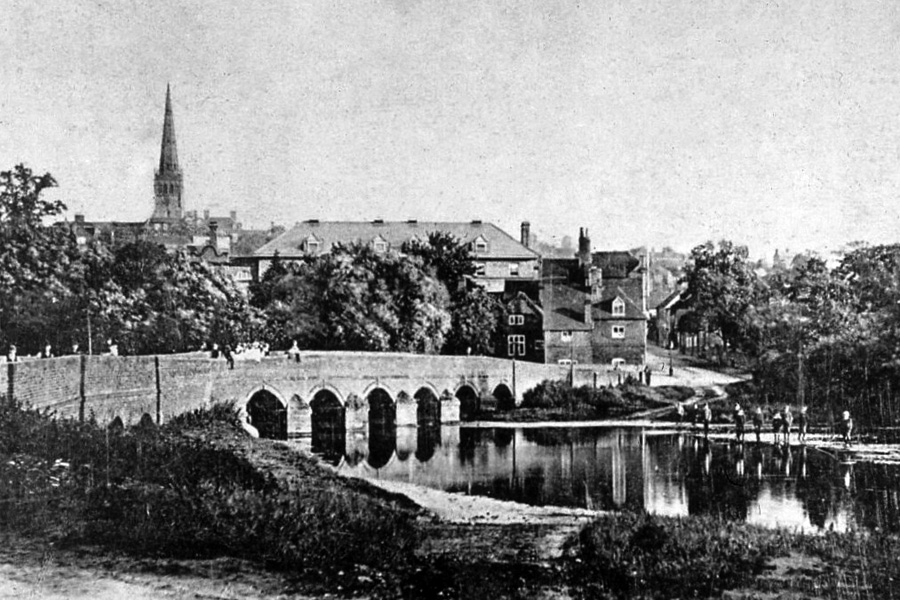 The River Tame flows past nearly 2 million people on its journey from source to the confluence with the River Trent. Within the Tame Valley Wetlands, the River Tame meanders past at least ten distinct settlements. 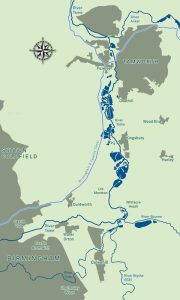 Castle Vale is the most south-westerly settlement, with an approximate population of 10,000 people, and has a distinctly modern residential character stemming from its history as a post-war overspill estate from Birmingham.

Leaving east Birmingham, the river winds past Water Orton, with its 16th century pack-horse bridge, and Curdworth. Curdworth is one of the first recorded Anglo-Saxon settlements in the Midlands, founded by the Mercian King Creoda in 585AD; ‘Curdworth’ is a corruption of ‘Creoda’s Worth’ – ‘worth’ meaning an enclosed settlement. The village is also the site of the first ‘battle’ of the English Civil War (1642 – 49); in August 1642, Parliamentarian and Royalist forces clashed near Curdworth Bridge.

On to Coleshill. Coleshill has its origins in pre-Roman Britain; a small Iron Age settlement has been found on Grimstock Hill. In the early Middle Ages the nucleus of the town moved to its present location, on a ridge overlooking the rivers Cole and Blythe. During the 16th and 17th centuries, Coleshill became important as a major staging post on the coaching roads from London to Chester, Liverpool and Holyhead. At one point there were over twenty inns in the town.

After Coleshill, the Tame swings north at Hams Hall, past Lea Marston and Whitacre Heath. These small villages have a different feel, due to their more rural location in North Warwickshire, and their history of mining.

After Whitacre Heath, the river flows passed the large village of Kingsbury. Kingsbury sits on high ground overlooking the river valley and has been settled since at least the 8th century, when it was a royal fort. The village expanded rapidly during the 19th century with the arrival of the railway in 1839 and the development of coal mining and gravel extraction. The colliery and railway station both closed in 1968 and Kingsbury is now primarily a commuter village. Visit the Kingsbury History Society website for more information.

Moving northwards, Dosthill and Fazeley provide a transition from the rural North Warwickshire landscape into a more urban environment. Both are ancient settlements and are recorded in the Domesday Book. During the 18th century Dosthill became a popular destination as a spa resort; people travelled from far and wide to enjoy the chalybeate spring-waters that rose near Dosthill Hall. In the 19th Century Dosthill grew rapidly as a centre for brick-making and mining. Fazeley sits at the junction of the Birmingham and Fazeley canal and Coventry canal.

Exploring Tamworth
A very useful self-guided walking Heritage Trail is available to download from Tamworth Borough Council. The Heritage Trail is also available from the Tourist Information Centre and as a free iPhone app. The guide helps visitors explore the many historical buildings and sites around the town. Tamworth’s Green Badge Guides provide walking tours of the town bringing history to life for visitors.

North of Fazeley, the river loops around the ancient Saxon town of Tamworth. Tomtum (Tametown) was the ancient capital of Mercia and site of King Offa’s Palace and Mint. In 757 AD Offa became the most powerful of all Saxon rulers and is also known as King of all the English. His palace was so magnificent in style and furnishings, that it was declared to be ‘the wonder of the age’.  Tamworth’s history is crammed with warfare and prosperity due to its location at the hub of travel routes and available natural resources. Much of its grand architecture remains.

Strategically positioned high on a cliff above the confluence of the Rivers Tame and Anker sits Tamworth Castle. The site of this motte and bailey castle dates from soon after the Norman Conquest. The warm red sandstone walls are thought to date from the 1180s and together the rivers form its defensive moat.

The River Tame has been a vital asset for the local communities along its course over many centuries and these populations have grown up using and relying on the water from the Tame. Today, the River Tame and its floodplain is still vital for people – for agriculture, for flood water storage, for purification of the air and water and for our wellbeing, as a place to relax, learn and be inspired.