Rivers and wetlands provide both an ideal home for a wide variety of mammals.

Otters are closely associated with wetlands and can be found on many of our major rivers and their tributaries. They will feed in the river on fish and invertebrates such as crayfish and then generally lie up during the day in one of their ‘holts’ amongst tree roots or in the riverbank.

Otters don’t just need rivers though, they also need the adjoining wetlands, marshes and wet woodland up to 5km from the main watercourse to rear their young and to provide a year round supply of food, including amphibians, small mammals and invertebrates.

Look out for otter spraints (sweet smelling and often containing fish scales) on prominent tree saddles, rocks and spits of land along the river edge, prints in soft mud (they have five toes, webbed feet and typically over 5cm across), otter slides on the river bank and rolling places in riverside vegetation.

After a long absence, otters are once again found all along the River Tame.

Water shrews like unpolluted streams, rivers, ponds and ditches and are good swimmers. They can often be seen scurrying along riverbanks with their long noses twitching, as they smell the air for insects. They are bigger than our other shrew species and have a very dark upper body and lighter lower body with a row of stiff hairs along the underside of their tail and hind feet to aid swimming.

Water voles have suffered a huge decline due to loss of habitat and predation by mink and stoats. They like lowland rivers, streams, ditches and ponds where they graze on the bank side vegetation. Listen out for the characteristic ‘plop’ as they dive for cover.

▸ See what we are doing to encourage the return of this iconic wetland animal.

Mink have successfully colonised most parts of Britain after escaping, or being released, from fur farms, much to the detriment of our native wildlife, particularly water voles. It is now thought that they are not the reason otters declined (an otter is twice the size of a mink!) but merely capitalised on the otters decline.

There are several species of bat that live along rivers and in wetland areas. The barbestelle, pipistrelle (55 kHz), Daubenton’s and the noctule are the common ones. The daubenton’s bat is known as the ‘water bat’ because it skims along the water surface catching flies with its feet and tail membrane. 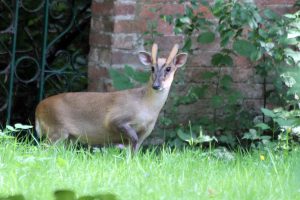 Muntjac are a common sight along the valley. These small Chinese deer were introduced in the early 20th Century to deer parks, but have since escaped into the wild. They are usually solitary and, unlike native deer, can breed at any time of year.

You may also find traces of fox and badger along the riverbank, attracted there by the abundance of wildlife. Look out for prints and scats.

Send us your wildlife observations.