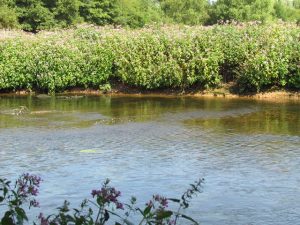 Himalayan balsam has rapidly become one of the UK’s most widespread invasive weeds, colonizing river banks, waste land, damp woodlands, roadways and railways. The Environment Agency estimates that the weed occupies over 13% of river banks in England and Wales. It can reach over three metres in height and competes with native plants, reducing biodiversity. Large scale chemical and manual control is often not feasible and not economically viable.

Using existing measures, the Environment Agency estimates it would cost up to £300 million to eradicate Himalayan balsam from the UK.

The release of the rust fungus comes after an eight-year research programme funded primarily by Defra and the Environment Agency, with contributions from Network Rail, the Scottish Government and Westcountry Rivers Trust. During the course of the research, testing in quarantine laboratories has established that the rust fungus causes significant damage to Himalayan balsam and does not impact on native species.

“This is a great step forwards in tackling Himalayan balsam. This invasive weed prevents our native plants from flourishing, can increase flood risk, and costs the British economy £1m per year to clean up. The work CABI has done in identifying a natural control method will help us reduce the impact of Himalayan balsam without any negative effects on native species.”

“The release of the rust fungus against Himalayan balsam is a result of over eight years of research evaluating the safety of its use against the target species. Over time, we should see a decline in the Himalayan balsam populations along our rivers, with native plant species recolonizing these degraded sites.”

To tackle the spread of Himalayan balsam, in 2006, CABI was commissioned to find a natural way to help control this destructive weed. The aim of CABI’s research was to find one of the many insects or fungi attacking the plant that had evolved to attack only Himalayan balsam, which could be released into the UK to control the weed while leaving indigenous species unharmed. CABI found that the rust fungus did just that.

Defra Ministers took the decision to allow CABI to release the rust fungus in July 2014. This decision followed the Food and Environment Research Agency’s (FERA) review of the scientific research and a public consultation on the proposed release of the fungus to control Himalayan balsam, which ran from May to June 2014.

CABI is an international not-for-profit organization that improves people’s lives by providing information and applying scientific expertise to solve problems in agriculture and the environment. Through knowledge sharing and science, CABI helps address issues of global concern, such as safeguarding the environment and improving global food security. We do this by helping farmers grow more and lose less of what they produce, combating threats to agriculture and the environment from pests and diseases, protecting biodiversity from invasive species, and improving access to agricultural and environmental scientific knowledge. Our 48 member countries guide and influence our core areas of work. These include development and research projects, scientific publishing and microbial services.

For more information on Himalayan balsam go to http://himalayanbalsam.cabi.org

For more information on CABI go to http://www.cabi.org/