Tame Valley Wetlands Landscape Partnership is working with CABI scientists and Partners to introduce a new control method for Himalayan balsam, a non-native plant species that is negatively impacting the river corridor and its associated wetland habitats. 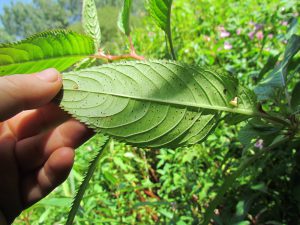 Non-native invasive species cost millions of pounds each year to control. Their negative effect on our native wildlife and habitats is of deep concern to conservation groups.  One such plant is Himalayan balsam.  In 2003, the Environment Agency estimated it would cost £300 million to eradicate completely; since then, the weed has continued to invade new areas.

Introduced to the UK in the 19th Century as an ornamental plant, its spread to the wider environment has negatively affected rivers, floodplains, connected ditches and waterbodies.  The plant efficiently spreads through seed dispersal, with each plant producing upto 2500 seeds that are released and catapulted to a distance of upto seven metres.  It is then widely spread through rivers and flood events, colonising river banks and connected wetland to create dense stands of plants.

In 2006, CABI scientists were commissioned by the Environment Agency, DEFRA and the Scottish Government to find a reliable and efficient biological control method for Himalayan balsam. Field visits to the Himalayan foothills of India and Pakistan identified a number of natural enemies that were tested as potential biological control agents for the weed.  Most of these agents were later ruled out, buta highly specific rust fungal plant pathogen, which lives its whole life cycle on Himalayan Balsam, was found to offer the best control solution.

The Tame Valley Wetlands area is now benefiting from over 10 years of CABI research, public consultation and associated field trials by introducing the rust fungus on to Himalayan balsam in the Tame Catchment area. If successful, the rust will help decrease the impact of the weed.

Tracey Doherty, Wetland Landscape Officer for Tame Valley Wetlands said “100,000’s of volunteer hours are spent controlling Himalayan balsam along our rivers and floodplains in the UK.  There are many negative effects of this plant on the environment, namely the monoculture that it creates. These tall 10-12ft plants with large leaves shade out our native plant species and also reduce the beneficial fungi that live in the soil that our native plants need but balsam doesn’t.  Its shallow root system does not help with soil retention, contributing to erosion and aiding sedimentation pathways into our rivers and streams that negatively affect water quality, fish and invertebrate populations. Biodiversity is reduced in these Himalayan balsam dominated sites.  Less species use the plant, although some pollinators do have a benefit when in flower.  An effective, plant specific rust fungus which has undergone consultation process and rigorous testing is a valuable tool to combat the spread and aid control of this invasive plant. The rust fungus will not eradicate Himalayan balsam completely from our landscape but it will make it more manageable, by being one of a number of plants along a water course instead of creating a monoculture, having more negative effects on our environment, than positive.  This means pollinators will still be able to use the plant but more importantly, they will be able to feed and pollinate our native plant species instead.  We are grateful to Heritage Lottery Fund and our Partners for supporting this pioneering work that will be monitored over the coming years.”

Carol Ellison, Senior Plant Pathologist, Invasive Species Management at CABI said “Invasive plants that have been introduced into a new area usually arrive without the natural enemies, such as insects and diseases, which keep them from dominating in their native habitats.  Biological control aims to redress this imbalance by introducing damaging, coevolved natural enemies into the invasive range, to achieve sustainable suppression of the weed.  This approach, although new to Europe, has been implemented globally for well over 100 years, with some spectacular successes. Strict scientific procedures are followed to ensure the safety of the selected agent. We are optimistic that once established in an area, the rust fungus will spread naturally and significantly reduce the growth and seed production of Himalayan balsam. Although this is likely to take a number of years to achieve, as the rust fungus needs to build up in a population, the impact will be permanent, unlike conventional control methods, such as manual removal and herbicides.”

This project is part of the Tame Valley Wetlands – a landscape partnership scheme supported by the National Lottery through the Heritage Lottery Fund, aiming to create a wetland landscape, rich in wildlife and accessible to all.

The Tame Valley Wetlands is led by Warwickshire Wildlife Trust in partnership with a wide variety of organisations including charities, local groups, statutory bodies and councils.