Many different birds live, feed and breed on and around our wetlands. Some can be found in other habitats but many are only found here. 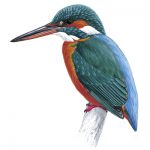 A striking electric blue flash signifies the arrival of the kingfisher, often accompanied by its high pitched piping call. A truly magical sight that can be seen on most types of river if the conditions are right. They use bank side perches, such as a tree branch, from which to dive down in to the river on unsuspecting fish below before returning to their perch to eat it, or they may take it back to their nest which lies at the end of a bank side burrow. Other fish-eating birds found on rivers include the cormorant, heron and the migratory goosander that spends the winter here before travelling north again to breed in the spring. 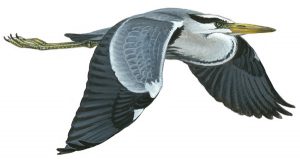 The stately heron hunts its prey by picking a spot near the waters edge where it stands motionless waiting for any unwary fish to pass within striking range of its long beak. Its slow relaxed flight and shear size make it hard to mistake for anything else if seen flying overhead. Fish are not its only food though, as it will take amphibians, invertebrates and small mammals. They nest in colonies (called a ‘heronry’) at the tops of trees.

Along the banks of rivers you may be lucky enough to see the nest holes of sand martens with a flock of these summer migrants performing aerobatics overhead in the pursuit of insects attracted to the water. What is the difference between a sand marten and the commoner house marten you see around towns? They both have a white underbody and a dark back, but the sand marten has a brown chest band and the house marten has a white band across the top of its tail.

Two species of grebe can be seen on rivers, lakes and ponds; the elegant great crested grebe and the little grebe or dabchick. There is a significant difference in size between these two species with the little grebe looking almost like the young of another species. They can be seen working their way along a river, diving down to feed every now and again. The great crested grebe has a spectacular courtship display involving a lot of head shaking as the pair of birds face each other.

Reed beds make ideal habitat for reed buntings and a variety of species of warblers as well as providing good cover for moorhens and coots to nest.

Waders such as snipe and curlew are more common on wetland and marshy areas but you may also see them along the shallow edges of a river or in the surrounding land, especially during and after the river has flooded. Curlew feed and nest in wetlands and riverside meadows and their evocative calls and accompanying display are a delight to witness.

Many different species of wildfowl, both native and migratory, can be spotted on our rivers and wetlands. Mallard ducks are the most common but you may also be lucky to see such species as widgeon, teal, pochard and tufted duck. Mute swans are a familiar sight grazing on vegetation beneath the river surface and often congregate in very large flocks over the winter. Canada geese can also be seen in large numbers over the winter.

With rivers and adjoining wetlands being such good habitat for a range of wildlife, it is not surprising that birds of prey are attracted to them. Buzzards and barn owls will hunt along the river corridor over the surrounding meadows. Sparrowhawks will fly low along riverside hedgerows and trees flushing out and catching small birds.

Send us your wildlife observations.