The River Tame is the main river of the West Midlands and the most important tributary of the Trent.

From its source at Oldbury, near Dudley, the river flows east through the city before swinging north at Hams Hall towards Tamworth, which takes its’ name from the river. After almost 100km, the river joins the Trent at Arlewas in Staffordshire.

The catchment of the Tame covers an area of nearly 1500 km² and contains a population of about 1.7 million people. Approximately 42% of the Tame basin is urbanised, making it the most heavily-urbanised river basin in the United Kingdom. Along much of its urban length the river has been heavily engineered or canalised, but as it leaves the city it begins to recover some of its’ natural meandering. 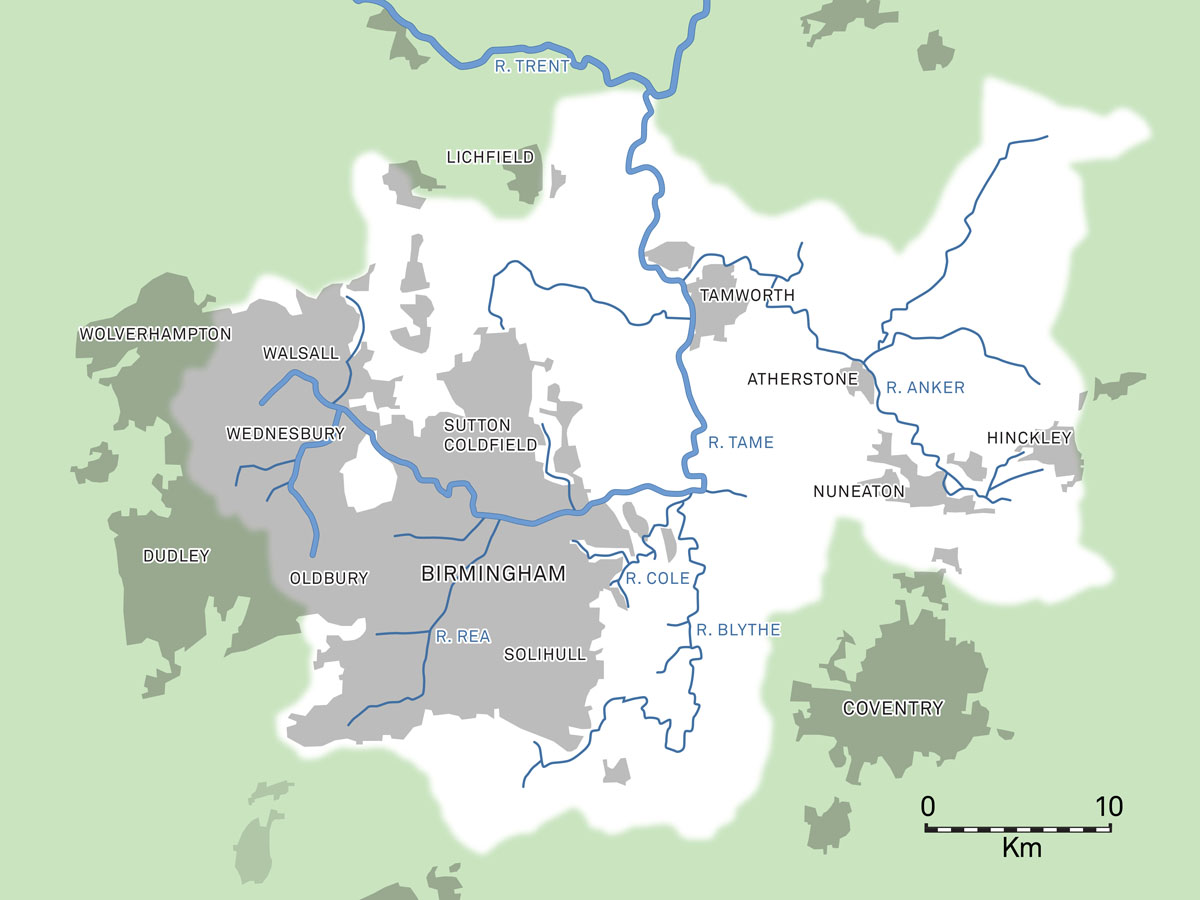 For much of its’ history, the Tame was a rural river. Up until the 19th century it was a productive fishery and popular with anglers; Isaac Walton, the author of ‘The Compleat Angler’ (1653), fished the river in the 1600’s, and trout from the Tame were served at Queen Victoria’s coronation dinner in 1838.

This changed as Birmingham rapidly expanded across the Tame’s catchment area.

The traditional industries of Birmingham and the Black Country, based on coal, iron and steel, were heavily polluting, and by the 1950s the Tame was one of the dirtiest rivers in Britain.

Changes in legislation and the decline of heavy industry have helped to drastically improve water quality. Improvements have been further aided by the development of three huge settlement lakes at Lea Marston, which together cover 150 hectares. These lakes, contructed from former gravel workings, were opened in 1980 and helped to remove heavy metals and other pollutants from the water, further improving water quality.

At Minworth, the river flows past Europe’s largest sewage treatment works, treating domestic and industrial waste water from across Birmingham.

Records show that a simple form of sewage treatment was carried out on the Minworth site as early as 1870. This consisted of running sewage over fields and farming the land. As Birmingham expanded rapidly during the industrial revolution, sewers were laid to local sewage works across the area. Over time these local sites have been closed and the sewers connected, via the Black Country Trunk Sewer System, to deliver sewage to Minworth.

To cope with ever increasing flows and load, the site has gradually been adapted to provide more intensive sewage treatment. The site also provides large expanses of wet grassland and semi-improved grassland habitat, providing vital undisturbed areas for wildlife.

Otters made a welcome return to the River Tame in 2000, after many years absence, as water quality improved.

They can now be found all along the river, including the outskirts of Birmingham.

Birmingham’s drinking water is supplied under gravity from the reservoirs in the Elan Valley in Mid Wales. This feat of engineering took place at the turn of the 20th Century and altered the hydrological cycles of the Humber and Severn river basins. Rainwater falling on the Elan Valley landscape no longer made its natural way south into the River Severn and out to the Bristol Channel, but instead, found itself diverted eastwards to Birmingham – eventually making its way (as urban runoff and sewage discharge from Minworth Sewage Treatment Works) into the River Tame, and eventually out into the North Sea via the Humber Estuary.

This additional discharge into the River Tame has changed the hydrology of the river. Small tidal-like processes can be observed on the river within the scheme area as rain falls on the conurbation of Birmingham, and as the population wakes up each morning and begins consuming water.

The River Cole runs from Birmingham through Coleshill, and the River Blythe runs through the more rural landscape of Arden from the other side of Packington Park. There is a strong influence of riverine vegetation with lines of willow pollards and poplars defining the course of the rivers. The floodplain opens out where the three rivers meet near Hams Hall, with a large number of pools, mostly the result of former sand and gravel extraction.

There are historic mill and water works buildings and modern small scale works and mineral extraction set against the open and heavily- urbanised backdrop of pylons and the E.ON- owned Hams Hall Distribution Park.

The River Tame flows north through Kingsbury and on to Tamworth, where it is joined by the River Anker from the east. After its confluence with the Anker, the River Tame continues its journey north-west out of the scheme area and further north towards the River Trent.

Explore the landscape of the Tame Valley Wetlands