Hams Hall Environmental Studies Centre is currently the base for the Tame Valley Wetlands project. The centre was opened by Sir David Attenborough in 1975 and is a popular destination for school children from Birmingham.

The centre features a classroom, pond, arboretum, a replica of an Iron-age Roundhouse and the half-timbered Lea Ford Cottage which was renovated and re-thatched in 2019. There is also access to neighbouring Church Pool Covert.

The centre was one of more than a dozen similar projects set up by the Central Electricity Generating Board at power stations and sub stations across the country. For more than 30 years the centre acted as a field studies facility for thousands of school children from Birmingham and Warwickshire. 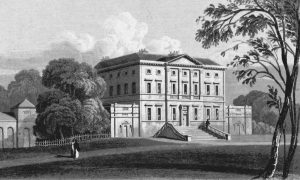 The Centre is situated in the old walled kitchen garden of Hams Hall, home of the Adderley family for 300 years until 1911. The garden walls date from 1773 and are surrounded by yew trees planted at the same time. The thick brick wall along the northern edge was built with cavities and fireplaces to heat the greenhouses placed against it. There are also a number of alcoves for storing beehives during the winter.

Just outside the garden, in the north-western corner, is a large oak tree, the sole survivor of a grand avenue of trees, planted during the reign of Charles I, that once lined the lane from the main house to the nearby church of St John the Baptist.

The house was demolished in 1921 to make way for what became one of the largest electricity generating sites in Europe, and is now the Hams Halls Distribution Park.

If you would like to arrange a school or group visit to Hams Hall Environmental Centre, there are a number of sessions we run. Please contact enquiries@tamevalleywetlands.co.uk or call 01675470917 for more information.